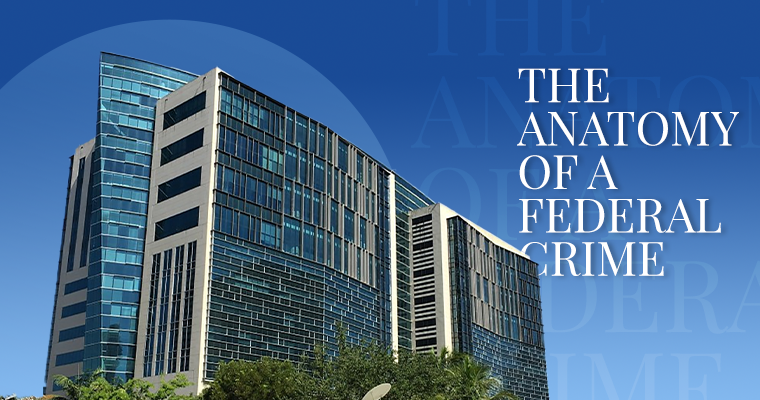 The Anatomy of a Federal Crime

While each crime may have its own unique set of circumstances and crimes usually vary from state to state, federal offenses involve the same legal principles and elements in all fifty states and territories of the United States. Understanding the differences between state offenses in Florida and federal offenses committed in Florida is essential to better protect yourself from breaking the law or protect your rights if you are accused of breaking the law.

Remember — Navigating the nuances of the state and federal laws can be tricky, so you need a reputable federal criminal defense law firm in Miami if you are under investigation or have been charged with a crime.

How does a crime become “federal”?

Most crimes in Florida are state law violations and are typically prosecuted at the state level as misdemeanors or felonies. However, some crimes may be investigated and charged at the federal level.

Federal crimes can refer to offenses committed on federal land, involving federal officers, against national security, and most commonly when they affect interstate commerce. For example, if someone assaulted an ordinary civilian on the street in Miami, that would be prosecuted at the state level. However, it may be a federal crime if committed on a military base or against an IRS agent in the commission of their duty. If a crime involves using the internet or mail to facilitate its commission – think fraudulent insurance claims or credit card fraud – then that crime can also be charged federally.

Other crimes like burglary, armed robbery, rape, and kidnapping can be both state and federal crimes. However, these are often prosecuted in the state court since federal laws require that it be committed on federal land or affect internet commerce.

These are some types of crimes most commonly prosecuted at the federal level:

How do the state and federal criminal processes differ?

Depending on the nature of the crime, a federal crime will be investigated by agencies like the FBI, DEA, or IRS (rather than local sheriffs, state officers, or local law enforcement) and prosecuted by the U.S. Attorney’s office (not a state or district attorney). Federal criminal prosecutions can be more detailed and involve a higher level of sophistication because the investigations are simply better and more comprehensive.

In Florida, the same crime can be prosecuted in both a state and a federal court if it violates both state and federal law. This is called a “dual sovereign prosecution,” and, though rare, it does not violate the “double jeopardy” clause. It happens most often than not in cases involving multiple robberies of commercial establishments.

What to do if you have been charged with a federal crime?

If you have been charged with a federal crime, you should discuss your options with a top Miami federal lawyer like Brian Kirlew, Esq.

One option is to fight the charges in court and seek a dismissal of the charges if possible. It might be that law enforcement officials entrapped you, or the charges are based on evidence obtained in violation of constitutional guarantees. You may also be able to make some deal with prosecutors, which could include pleading guilty or no contest for a lesser charge and receiving a more lenient sentence. You also have the right to demand a jury trial, and Brian Kirlew, Esq. is a skilled and experienced trial lawyer who has a track record of getting great results before a jury.

Whatever the approach or outcome, it is crucial to have someone on your side who knows how to navigate these difficult waters.

If you have ever wondered what makes a crime become categorized as a federal offense, you are not alone. Federal crimes are defined by more than simply the severity of the violation. Hopefully, this guide will help you understand the elements that constitute a federal crime and how these factors determine whether or not you will be on trial in a federal court instead of a state court.

Contact the Kirlew Law Firm at 305-521-0484 or visit us online at www.kirlewlawfirm.com to get more information on Federal crimes, defenses, and legal representation.

Working with a Federal Defense Attorney—Tips for Selecting and Getting the Most Out of Your Counsel
January 6, 2023

The Benefits of Having an Experienced Federal Criminal Defense Lawyer on Your Side
October 12, 2022
Go to Top